One Thousand White Women, Jim Fergus
In 1854 the Cheyenne tribe and the U.S. government met to negotiate a peace treaty. Among the Cheyenne requests was that the United States give them one thousand white women as wives. The request was not in jest; the tribe believed that a child belonged to its mother's clan, so the children of these unions would help to integrate the Cheyenne and the whites. Naturally, the government rejected the request.

In this novel, Jim Fergus wonders what would have happen if they hadn't. The book is told from the point of view of May Dodd, a white woman who becomes part of the government's clandestine "Brides for Indians" program. The book flounders a little initially as the author tries to make the program seem plausible, but once the background ends and we meet the brides the novel is absorbing. The women in the program are all fascinating characters, and May's observations as she adjusts to her new life are both honest and often heart wrenching. Reading this book didn't really make me wonder what would have happened if the thousand white women had existed, but it did make me think about how different things could have been between the whites and the Native Americans in those turbulent decades when the white pioneers headed west.

Borrowed from the library

Running the same old routes can get tiring after a while, which is why I think this race looks awesome. If I still lived in the Northeast I'd be in!

From the race website:
Protect your brain and run for your life. This is one race where your legs giving out are the least of your problems. Run For Your Lives is a first-of-its-kind event, one part 5K, one part obstacle course, one part escaping the clutches of zombies — and all parts awesome.
Posted by ACQ at 6:03 PM 3 comments:

I've been debating whether or not to post anything about the conclusion of the Space Shuttle program because I wasn't sure I had anything to add that hasn't already been said. That's still true, but I have seen so many beautiful tributes that I thought I'd show them here along with my thoughts. (source)
Although I technically work for the International Space Station (ISS) program, not the shuttle program, my work has been very much tied to the shuttle as it brings up most of the equipment we install on Extravehicular Activities (EVAs aka spacewalks), and most US EVAs are conducted by the shuttle crew while the shuttle is docked to station. So although my job is safer than most, its nature had already begun changing by the time STS-135 landed. Instead of focusing on the next flight, I'll be working on preparing ISS for maintenance and for the new commercial vehicles. I'll miss the excitement of a shuttle mission and the camaraderie I developed with the crews and the rest of the team during the training and preparation for flight. The shuttle has been America's program in space for as long as I've been alive, and its absence leaves a real gap. What saddens me most though is not the fact that the shuttle program is ending, but rather the lack of a defined plan for NASA's next program. I worry that the longer it takes to establish a new program, the more knowledge will be lost and the less the public will support our next mission. View of the final landing taken from ISS (source)
For now, let's take a moment to acknowledge all the amazing accomplishments of the last 30 years. 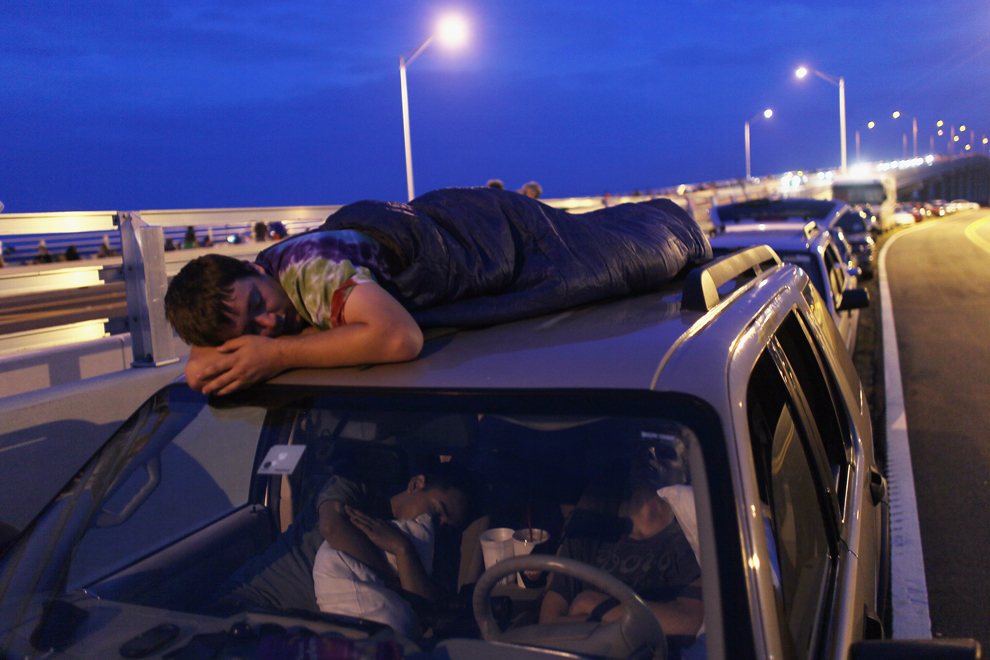 Take a moment to peruse a multitude of beautiful photos from The Big Picture. Notice how many people went to great lengths to see the final launch; clearly space is still inspiring!

And finally, here's excellent video with footage from every mission.

The Big Burn, Timothy Egan
This book tells the story of the formation of the Forest Service by Teddy Roosevelt and its first real test in a massive 1910 wildfire which destroyed much of Idaho and Montana. My dad recommended the book to me quite a while ago, but it sat quietly on my long "to read" list. However, once I visited the Grand Canyon and saw the massive amount of work completed thanks to Roosevelt's work, The Big Burn caught my eye again, and I'm glad it did.

The beginning is a little slow as Egan relates the circumstances which caused Teddy Roosevelt to begin championing the cause of conservation. It is mind boggling to imagine that were it not for him we could have strip mined the Grand Canyon and destroyed the forests in the Pacific Northwest. The pace picks up once the focus narrows on the dry summer of 1910 and the specific rangers, woefully short of resources, who were left to battle the three million acre blaze. The stories of their bravery and miraculous survival are as amazing as the destruction and death are disturbing. If you can make it through the first third, the story is well worth the read.

Borrowed from the library
Posted by ACQ at 8:52 PM 3 comments:

...or should I say "Spacetykakes!"

Anyone who is from the East Coast or has visited has probably tried (and enjoyed) the ubiquitous Tastykakes. Tastykakes come in all styles and flavors and can be purchased at just about every grocery store and gas station. Whenever I'm home, I pick up some of my favorites: Lemon and Apple Tastykake Pies (or as I call them, Tastypies).

Apparently I'm not the only one who enjoys these sweet treats. Chris Ferguson, the commander of the final Space Shuttle mission which is currently on-orbit, is a Philadelphia native and brought some along with him on this mission.

He also brought a Chase Utley jersey up on his last mission, which makes my #26 jersey suddenly seem way less cool as it has never been in orbit. I wonder if he ever wrote Chase a letter like Mac did?

Congratulations Fergie, you're my new favorite astronaut!
Posted by ACQ at 6:49 PM 4 comments:

Medium Raw, Anthony Bourdain
Anyone who read Bourdain's first book, Kitchen Confidential, and is looking for a sequel needs to look elsewhere. Anthony Bourdain has come a long way from the bitter, cynical, darkly humorous, coke-addicted chef in the first book. Now he's a bitter, cynical, darkly humorous food writer/tv star. The main difference between the two books is that Medium Raw, much like The Guinea Pig Diaries, seems to be as much a compilation of separate essays as one coherent book. That said, the essays are still entertaining. The main exception occurs when Bourdain hovers too long on personalities in the food business without sufficiently making the reader care. For the most part, though, he hits his mark. He's witty and often (for me at least) laugh out loud funny. For someone who enjoys Top Chef and felt horrified by Fast Food Nation, this is a great choice. (Note: when tagging this post, I realized I have a LOT of food related tags. I guess I shouldn't be surprised!)

Borrowed from the library
Posted by ACQ at 4:39 PM 4 comments:

Into The Wild Nerd Yonder

Into The Wild Nerd Yonder, Julie Halpern
At 5:30 this Saturday, I walked upstairs and asked the Dude "How do you know when a book was great?" He smirked at me and answered "I'm guessing it's when you just read the whole thing in two hours." He was right. I sat down Saturday afternoon with Into the Wild Nerd Yonder, not knowing what to expect, and was immediately drawn in. The book chronicles' Jessie's sophomore year of high school, when the two best friends she has had since she was a toddler decide they want to become punks and Jessie isn't sure where she fits in any more. Based on that sentence, I'm sure you can tell that this could be just another teen coming of age story, but Julie's character is so clever, funny, and real that it loses any concerns about being cheesy. It is made stronger by the great supporting cast, including her older brother Barrett and her quirky parents. Jessie is smart and enjoys school, but worries about being nerdy, something I could definitely relate to. Is it better to be lonely and unlabeled or throw yourself in with a fun group that others call nerdy? I absolutely adored this book as it is just plain fun. I'll definitely be looking into Halpern's other novels even as I'm busy harassing all of you to read this book!

Borrowed from the library
Posted by ACQ at 5:46 PM 6 comments:

ACQ
I've loved reading for as long as I can remember and now that I have my very own room to fill with books I am collecting them the way some women collect shoes. When I'm not reading I'm watching football, cooking, or playing with my dogs, Max and Layla.